To loveDroving flock and cattle 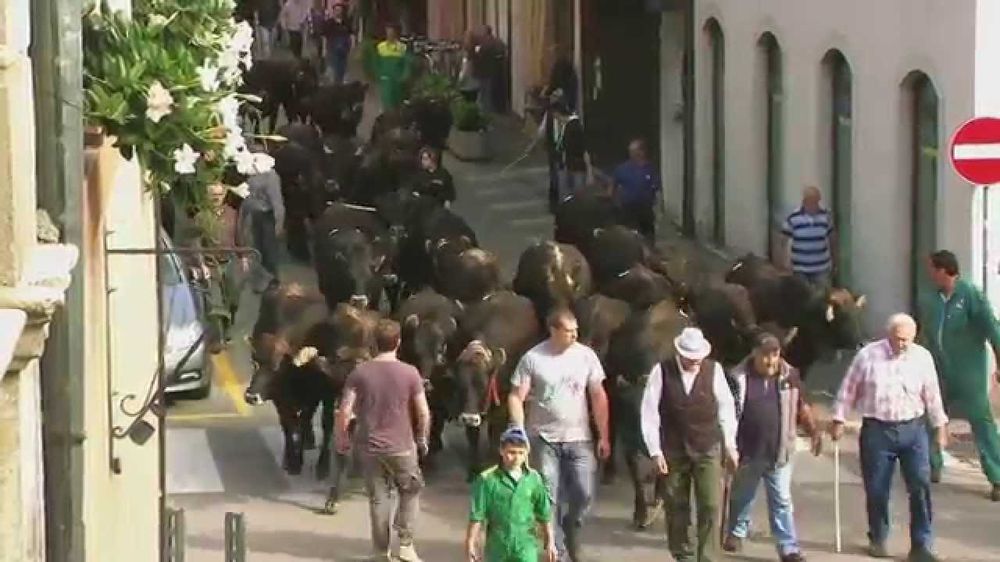 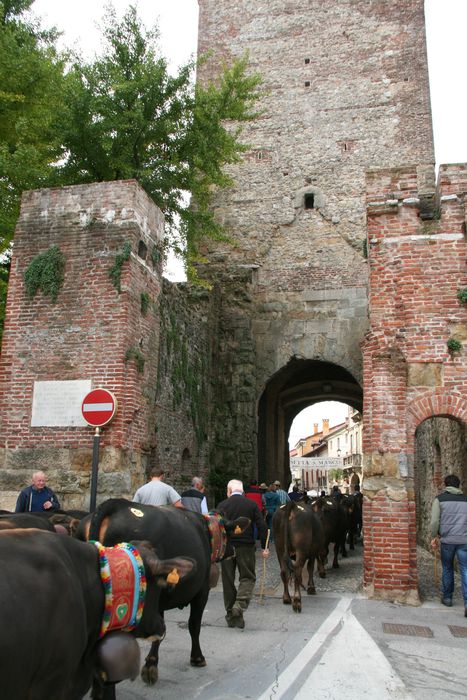 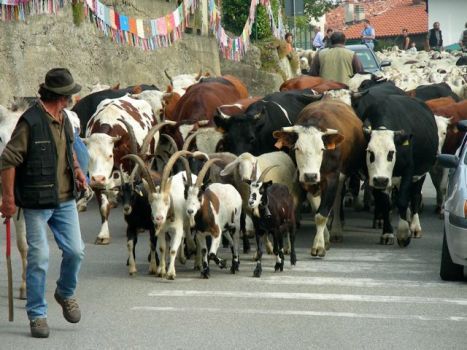 The journey undertaken by shepherds and their flocks in mutual brotherhood, paced by the unstoppable flow of the seasons, to move from the resting areas in the flat lands, where they spent the winter, to the lush meadows of the highlands, where they settled from April to October, has roots that get lost in time. This journey, travelled along the so-called flock routes is known under the name of transhumance - from the Latin words "trans" and "humus" - which means going from one land to another and it identifies the seasonal move among well-identified and defined permanent meadows, usually handed down from father to son in accordance with family traditions.
Flock routes were for the shepherds and their flocks the highways of our days. They were the shepherd's roads, along which livestock migrated. This ancient tradition is still repeated today, the main difference being that transhumance mainly involves cattle, as flocks have decreased.
Since time immemorial, Marostica has been the passageway of the ancient flock route known as Arzeron della Regina that connected the flat land from Padua to the pastures of the Asiago Plateau. A portion of this route, the Sejo road probably founded by the Romans, is hidden among the hills. This is an ancient stone road that is witness of the archaic history of men and animals on the move.
These people deserve great credit: their life choice teaches us to respect nature, to walk or take our bikes whenever we have the chance to. This will have a beneficial effect on our health and mood and we will have the opportunity to get immersed in the beauty of the landscape around us.
The tradition of transhumance is so rich in culture and history that UNESCO eventually recognized it as Intangible Heritage of Humanity in November 2019.
The ancient festival Fiera di San Simeone (last weekend in October) is the yearly occasion to renew this tradition: Piazza Castello, the castle square, welcomes men and animals back from the malghe (typical mountain huts of the northern mountain regions of Italy), with markets in which typical products are sold, music is played and people dance to celebrate the rite of the blessing of autumn fruits and the tradition of transhumance.

The flock routes: a connection between the Venetian flat land and the mountain - transhumance between history and traditions

Since ancient times the Altopiano dei Sette Comuni (lit. Plateau of the Seven Municipalities) and the flat land have woven important relationships, based on commercial and cultural exchanges. At the times of the Romans in Veneto, the access points towards northern Europe became particularly strategic, both from a military and economic point of view, activating transit and trade routes of great importance.
The presence of pastures contributed to defining the mountains of the Asiago Plateau with the term "alpes", i.e. mountain pastures, in which the sheep stayed from April to October and from which they went back down to the flat land in winter. Shepherding played such an important role that real roads, i.e. flock routes, were built to connect the flat land to the mountain pastures. One of these was Arzeron della Regina connecting Padua to the Plateau. This route is still partly visible and it can be travelled from Padua along the Brenta up to the slopes of the Plateau.
The production and marketing of wool and cloths developed in Veneto starting from the 12th century, but the expansion of the Republic of Venice in the mainland contributed to the improvement of the wool quality to such extent that it was eventually considered the best wool in Italy in the 15th century, with prices that could be compared to the prices of the best English wool, the highest quality raw material par excellence. Between the end of 1800 and the first half of 1900 some families of the plateau left their homes to seek their fortune elsewhere. Sheep farming, which had been the main business of the area for centuries, experienced a crisis which determined strong social and cultural changes. Many families settled at the foot of the plateau, especially on the border between Vicenza and Padua, in areas characterized by springs and stable meadows, where former shepherds started breeding cattle in order to exercise their activity more easily. This marked the beginning of the history of modern transhumance, during which flocks of sheep and herds of Rendena and Burlina cows alternate along the ancient Arzeron della Regina route.

The Arzeron della Regina and the Wool route

History has it that a flock route had been built by the Romans going out of Padua and heading north. This route was known as Arzeron della Regina and it climbed north towards the Plateau, going through Marostica. The term Regina (lit. Queen) seems to find an explanation in the fact that this was the name given to important roads in Medieval times and only at a later stage was it used for a clearly identified political authority (another explanation may be that the Romans used the term "royal" to define precise geographical areas). On the other hand, Arzeron comes from the Latin word agger (= riverbank) which clearly indicates a large embankment.
The route, which was built on a previous Paleovenetian and Roman route, connected Padua to Marostica and was 3 to 5 meters high and 30 meters wide. This large rampart with trapezoidal cross-section, which rose over 4 meters in marshy areas, certainly ran from the junction with the Postumia road on the way to Padua, passing through Montà, Ponte Molino, and Beato Pellegrino. It was paved several times by the population and it consists of two sections, one in Via San Bortolo and the other next to Villa Ottoboni. After Ponterotto, it reaches Taggì and Villafranca. It was used as a transit route for centuries, especially by flocks heading to the Asiago Plateau. A current hypothesis is that the embankment (arzeron) was initially created to contain the floods of the Brenta river towards the west and was then used as a hydraulic work. Over time, however, it was transformed into an important trade route, i.e. the wool route, on which generations of shepherds walked with their sheep whose wool was a considerable economic resource for the city of Padua.
The shepherds and their flocks used to arrive in Marostica, to pass through the Piazza Ortigara square in the borough Borgo Giara, the "outlet of the valley", dominated by Mount dal Pauso, and they eventually headed north, walking along the paths that lead to Crosara and from Crosara to Asiago, along the Val d'Inverno valley and the ancient road of Sejo.

The journey to the green meadows of the Plateau in spring or, on the other hand, the return to the enclosures and shelters in the flat land in early autumn was a slow and long journey: the journey took several days, with departures very early at dawn.
This is not a journey for all breeds of sheep or cattle. Only rustic animals can take it, docile along the way, capable of adapting to changes in eating habits and of anyway having good production levels. In many cases flocks were formed putting together the animals of several owners, who joined together to share the hardships of the journey, as for many of them these animals (sometimes one or two only) were all their wealth. Among the sheep, the Foza breed was the most popular, with an Alpine character, robust and docile. The most widespread breeds of cows were the Rendena or the Burlina, stumpy animals with strong legs which did not require much food to produce "na bona late..." (lit. good milk), rich in proteins and fats.