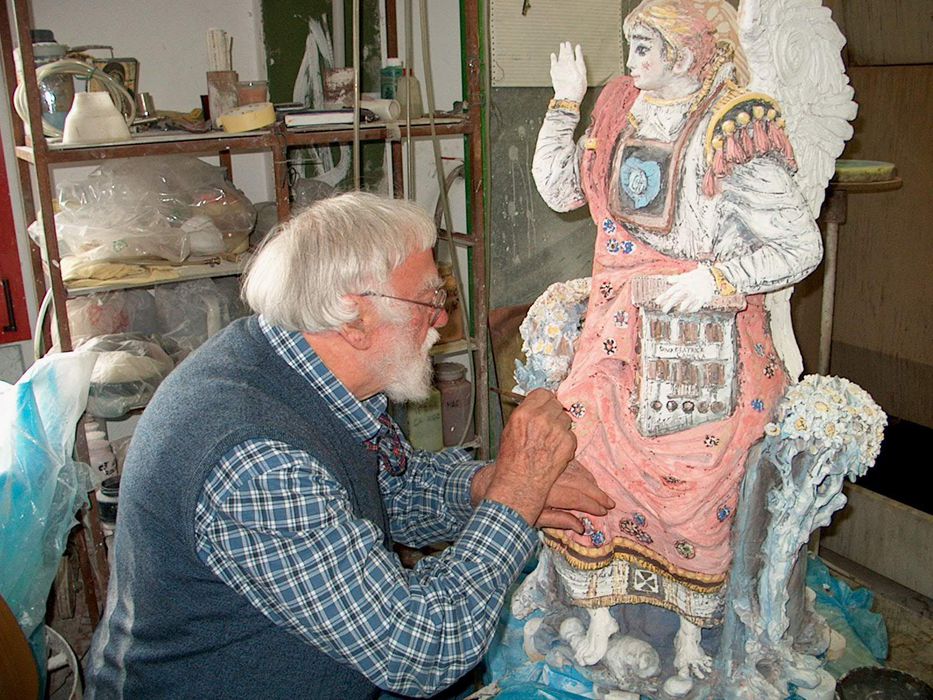 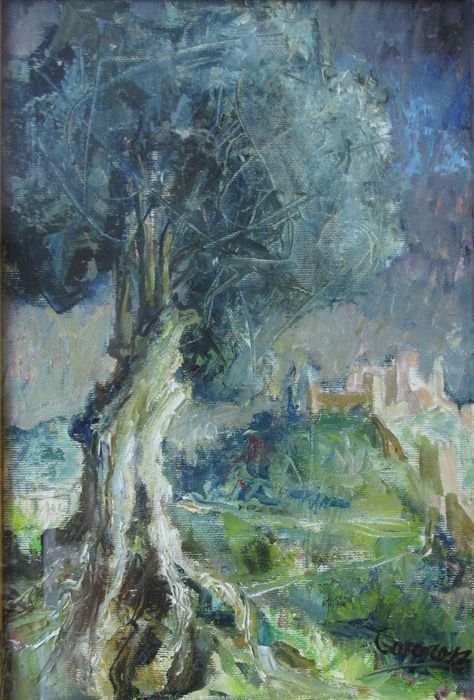 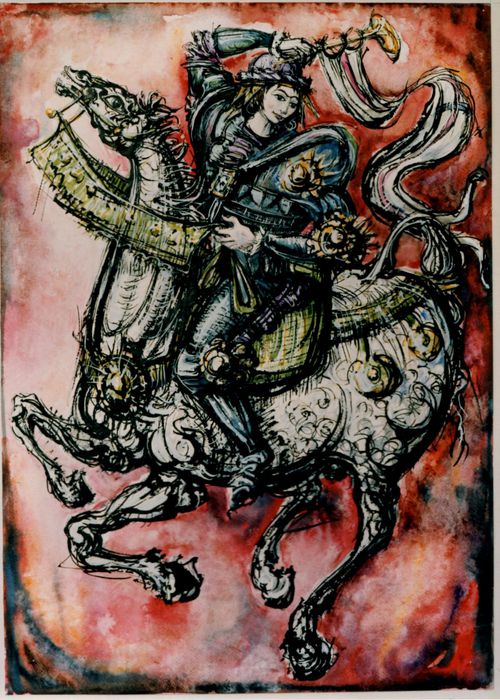 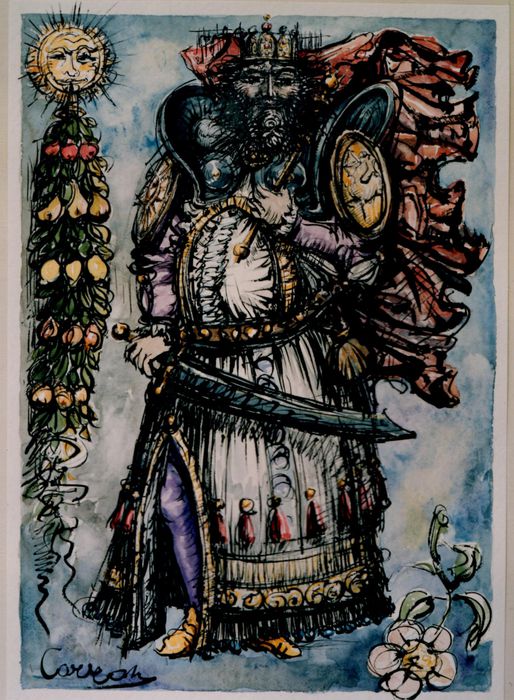 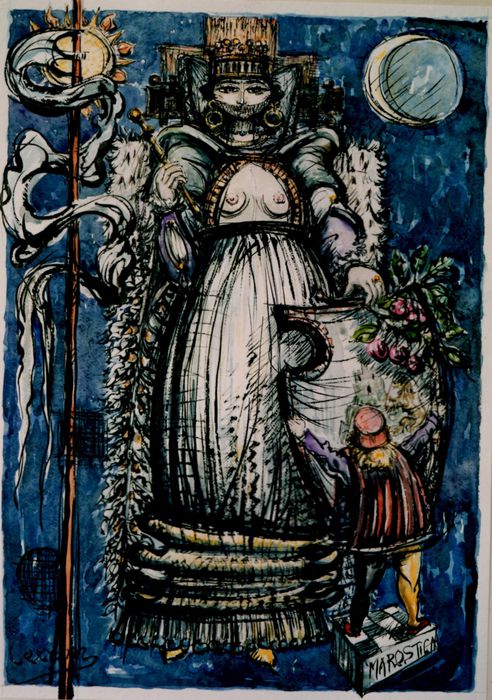 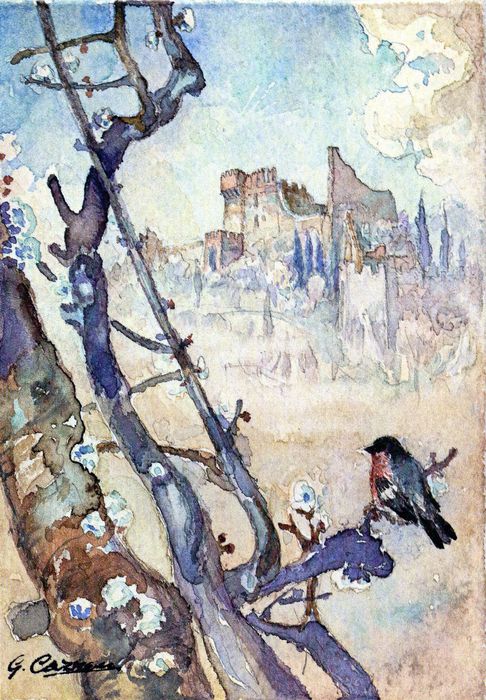 Gigi Carron was born in Marostica on 6th December 1926, where he spent his childhood and youth.
A painter, sculptor, ceramist, entrepreneur, educator and a partisan courier in Carnia, Langhe and the Asiago Plateau. In the seventies, he was the first man ever to glide from Mount Grappa with a hang glider, which he called simply kite. He founded and managed, with some artisan partners, the Alcyone ceramics factory. Gigi Carron was faithful to the medieval borough of Marostica - a medieval ring embossed between the flat land and the hills - for his entire life. Here the artist found the right place for concentration and in-depth study; he taught children of the local school how to discover their creative aptitudes through drawing. He lived a symbiotic relationship with nature, explored the metaphysics of everyday life and approached Pavel Florenskij's contemporary mystical philosophy. Plastic art and painting were the domains where he sought the gate connecting the physical world to the metaphysical world. His "top-down" vision of time allowed him, at a glance, to grasp the unicum that unites ancient art with contemporary art, tradition with the formal innovations of modernity. This is why his work is suited to the term iconostasis, as Elèmmire Zolla intended it: "a border between the visible and the invisible world, a place where sublime painting manifests itself, where things are produced by light" (text by Rodolfo Bisatti).
His artistic activity ranged from painting to sculpture using different techniques and working on a variety of materials. The majority of his most important works were created for various city institutions. They can be admired in Marostica and they include:
Opere di Misericordia, ceramics, at the former Hospital of Marostica; Le tre Porte in bronzo, bronze doors at the church St. Maria Assunta in Marostica (1979-1985); Via Crucis, ceramics, at the church of San Luca (1995); Il busto in bronzo del Dott. Piazza, Dr. Piazza's bust placed under the arcades of the Castello Inferiore castle (1984); a bronze panel commemorating the award “Città Veneta della Cultura 2002” (Veneto city of culture for the year 2002) given to Marostica by the Veneto Regional Authorities, which is placed in the entrance hall of the Castello Inferiore castle; Arte del Buon Governo, ceramics, at the foundation Fondazione Banca Popolare di Marostica Volksbank (placed in the Meeting Hall in 2002); La Madonna del ciclista, ceramics, at the Chiesetta del Ciclista church in Valle San Floriano (2006).
In addition to oil paintings, his painting production includes a series of watercolors which he entitled Omaggio a Marostica (lit. Homage to Marostica) and which he exhibited at the Castello Scaligero castle in 1983. In 1988 he presented the work titled Ritratto di una città. Bassano. Cento acquarelli (lit. Portrait of a city. Bassano. One hundred watercolors) at the Palazzo Bonaguro palace. His skillfully drafted Catalogue was also a resounding success. The six characters of the Partita a Scacchi (lit. Chess Game) made with mixed media and reproduced in lithographs were also highly appreciated.
The artist also created numerous posters and medals for various associations and city bodies.
Miscellaneous sculptural works, some of which are very significant, can be found in the cemetery of Marostica.