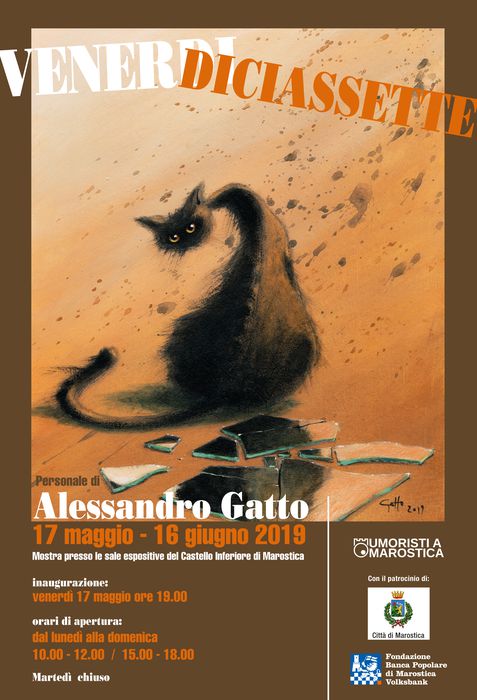 Gruppo Grafico Marosticense (lit. Marostica Graphic Group) has a long history beginning back in 1969 when a group of students gave the wave of protests in 1968 the expressive key of humor, making a truly creative choice that still continues today. The event soon became an international graphic humor competition. Since 1975, the competition has been based on specific themes which have always been focused on man and the antinomies of our society. Some of the proposed themes, which have often anticipated trends and fashions, include: "Man and Power", "The Child: an Endangered Species", "Foreigner", "Toys", "Dreams", "Beauty", "Time", "Rights", "Bread", and "Water".
The quality of the works, the seriousness of the jury, the freedom of thematic choices, independence from political and/or commercial strategies, as well as the passion of the group members have made the competition one of the leading industry events in Italy and abroad, which is still highly appreciated by artists from all over the world.
The long journey of "Humorists in Marostica" has been accompanied by great personalities who participated as member artists of our Jury. An affectionate mention goes to: Romano Battaglia, Bonvi, Bruno Bozzetto, Osvaldo Cavandoli, Giorgio Cavazzano, Paolo Dalponte, Lorenzo de Pretto, Vittorio Giardino, Emanuele Luzzati, Franco Matticchio, Giuliano Rossetti, Alessandro Saijni, Eugenio Saint Pierre, Sergio Toppi, Silvia Ziche, Toni Vedù, Dutchman Karel Thole, Argentinean José Antonio Muñoz, Slovenian Stane Jagodic, Czechs Adolf Born and Vlasta Zabransky, Bulgarian Milko Dikov, Hungarian Jeno Dallos, English David Mckee and, last but not least, Argentinean Quino.
The biennial competition has been alternated for some years with monographic anthological exhibitions. In 2015 the anthological exhibition was on Eronda, alias Mario de Donà, a well-known graphic designer from Belluno. In 2017 works by Gianluigi Coppola were exhibited, who is an important illustrator and cartoonist that also worked for the Italian comics Dylan Dog and Martin Mystère.
In 2019 the event hosted the exhibition of Alessandro Gatto, a frequent award-winning artist both in Italy and abroad, who is mainly dedicated to practices such as watercolor and engraving which he re-interprets in advertising graphics and in more personal works that he likes defining as "humorous" or rather "sarcastic".

Event organized by the Marostica Graphic Group in collaboration with the Municipality of Marostica and with the patronage of the Banca Popolare di Marostica Volksbank Foundation.