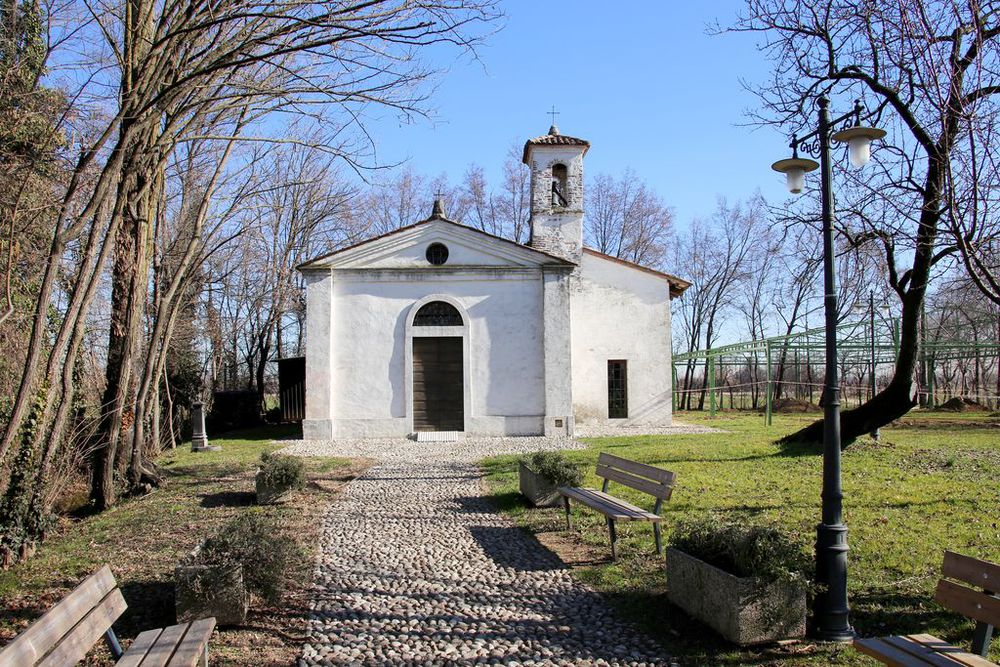 The first written document that mentions the church dates back to 983 A.D., and it states that the Bishop of Vicenza Rodolfo donated some land near the church of San Vito in Marostica to the Benedictine friars of S. Felice di Vicenza.
The church is believed to be part of a "Curtis" (court) with peasants who cleared the land and grew crops under the direction of the Benedictine Monks. The term "Curtis" became "Vicus", or village. An act of 1442 mentions "ORA SAN VITI APUD ECCLESIAM SAN VITI", namely the contrada of San Vito near the church of San Vito.
The church, whose apse faces east, has a harmonious façade, with an architraved door with lunette that ends at the top with a tympanum and a small rose window. Outside, to the right, you can see the bell tower and a second door with lunette that leads to a room and the sacristy.
The square-shaped bell tower is positioned between the church and the sacristy. The belfry is lit by four single lancet windows that face the four cardinal points. The two bells are original: one has inscriptions in Gothic characters forged in ovoid form by "Maistro Bagio", while the other, signed "Martino Piccinino", carries the date 1706 and the inscription: "Made with the alms of the Faithful".
The architectural ensemble is surrounded by tall plants, some evergreen.

The interior has a single nave, the ceiling has wooden beams that support bricks with tiles on top. The triumphal arch leads to the presbytery where you can see the altar. A niche in the apse holds a wooden statue of the Immaculate Madonna of Lourdes, a terracotta crucifix by Gianni Bertacco and a painting in naive style depicting saint Vito, his nurse Crescenzia, and Modesto, who were martyred in the 3rd century BC. The work, by Geremia husband and wife, takes a canvas preserved in the church of Arsiè (BL) as a model. On the right, a door leads to the sacristy with, on its walls, some decorative stone artefacts that had been covered up in the past but which emerged during the restoration. The way they are carved makes it possible to confirm that they could date back to the Longobard period.
On a wall of the staircase leading to the upper floor you can see a large frescoed crucifix with the inscription: "PER LIGNUM CRUCIS DOMINI A NEMICIS NOS LIBERA NOS DEUS NOSTER" = (With the sacrifice of Our Lord’s cross deliver us God from our enemies); in past centuries these rooms were used as a hermitage. In 1666 two hermits lived there: "Brother Francesco Rielo of 60 years and Brother Agostino Bertagnan of about 20 years".
In 1745 a hermit, Arcangelo Fior da Nove, mentioned that the church had a frescoed Crucifix in its apse, a table with predella where stories of the Blessed Lorenzino were painted, an altar "carved in stone, in the sacristy, and connected rooms with furnishings and sacred vestments.
The historian Giovanni Spagnolo wrote in 1907 that the church was still in good condition. From about 1930 it was inhabited by various families. The last one to live there was Agostino Boin, who lived alone and was known as "big head". He rang the bell only at traditional times of the day. To live, he would go to the families in the surrounding area. He died in 1956. After this, the church was abandoned, leading to its gradual ruin; the roof collapsed and trees started growing in the nave. It received another hard blow on 6 May 1976 from the strong tremors of an earthquake in Friuli. In 1980 the inhabitants of San Vito and the neighbouring districts started raising funds to restore the church. In this manner, and also thanks to the collaboration of everyone - men and women, bricklayers, carpenters and electricians, architects, engineers, surveyors, the Municipality of Marostica and the pertinent public bodies, the Parish of Sant'Antonio Abate with the archpriest Don Domenico Zordan - after about two years of work it was finally possible to open the church again with a solemn celebration held on Sunday, October 11, 1987.

This point of interest is part of